Go back to Find a Centre search

Notes from this centre

Bootle Child Contact Centre is one of five supported Centres in the North-west runs by an independent charity, Child and Family Connect. They were originally run by the WRVS and were originally part of a much larger group. The Charity was established in 2003 so the centres have been in existence for over twenty years.

The object of the charity is’ to offer a safe, friendly and neutral environment in Greater Manchester, Merseyside and Lancashire where children of separated families can spend time with one or both parents and other family members. It is a child-centred environment that puts the needs of the children first.’

Bootle is a town in the Metropolitan Borough of Sefton, Merseyside, which had a population of 51,394 in 2011. The wider Parliamentary constituency had a population of 98,449. In 2011 the population was 97.8% white, (50,270) with only a few hundred from other ethnic groups.
The town was heavily damaged in World War II with air raids against the port and other industrial targets. Post-war economic success in the 1950s and 1960s gave way to a downturn, precipitated by a reduction in the significance of Liverpool Docks internationally, and changing levels of industrialisation, coupled with the development of modern suburbs and the expansion of industries into the Merseyside hinterlands. By the 1980s, there had been a sharp spike in unemployment and population decline. Large-scale renewal projects have begun to help regenerate the local economy.

There are two railway stations served by frequent electric services from Liverpool to Southport. These are Oriel Road near the Victorian era civic centre, and New Strand, serving the shopping centre. A third railway station is situated on the boundary of Bootle (Old Roan) and is part of the Liverpool to Ormskirk Line.

Linacre Methodist Mission is easily accessible from the M57/M58 junction and there are good directions on the website. Buses pass the door.

Photos from this centre 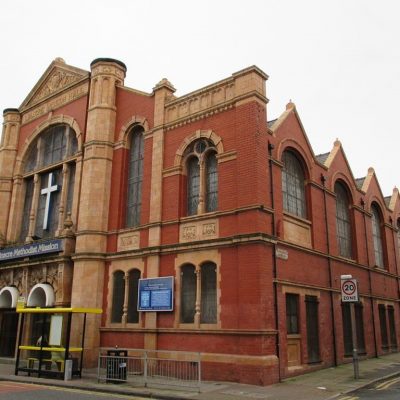